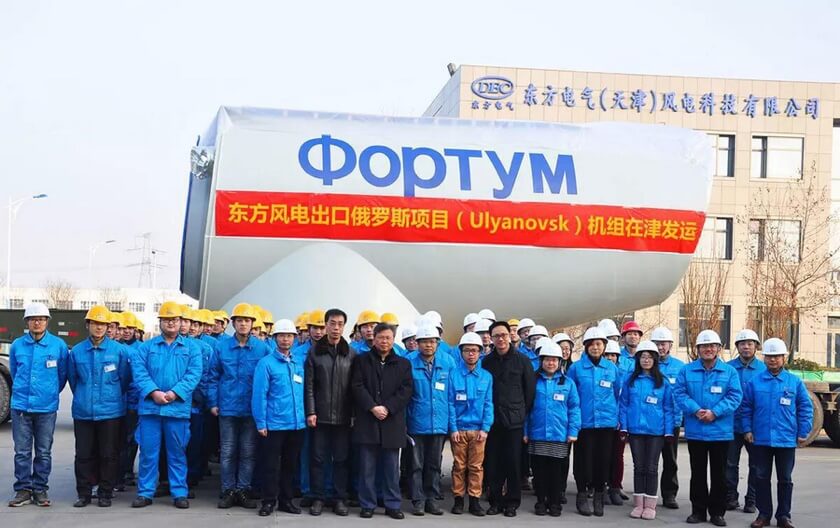 In the near future wind turbines will be installed in the Ulyanovsk windpark. The supplier of equipment is the Chinese company Dongfang Electric Wind Company Limited. According to the press service of the regional government, at present 14 DF2.5MW-110 turbines with a capacity of 2.5 megawatts each have been sent to Ulyanovsk.
Ulyanovsk wind farm will be Russia’s first industrial park of alternative energy, the capacity of the generated energy will be 35 megawatts. Opening of the first phase of the wind farm is scheduled for the second half of 2017.
“Renewable energy will become an additional point of growth in the regional economy. We began work on localizing the entire chain of alternative energy production first in Russia, and we are approaching the formation of a new industrial cluster in the territory of the Ulyanovsk region every day, “said Governor Sergei Morozov.
The investor is the international company Fortum (the RAWI member), which will invest $ 65 million in the project. In order to further develop wind energy in the Ulyanovsk region, Fortum and Rusnano signed an agreement on a consortium, which included several Ulyanovsk companies, including ULNANOTECH ( the RAWI member) and the AeroComposit-Ulyanovsk plant, Manufacture of wind turbine blades. Besides, other regional enterprises, such as Dimitrovgradkhimmash and KTTS Metallokonstruktsia, are ready to launch production for the wind industry, ready to produce towers for wind turbines, Legrand, which plans to produce switching equipment for the wind power infrastructure, as well as the Hempel paint factory .
We should note today the project of the next wind park with a capacity of 600 megawatts is being developed, for which wind measurements are currently being conducted. According to the calculations of specialists, by 2024 wind energy will provide 30% of energy consumption in the Ulyanovsk region.